As a young parent, I often heard comments about how hard parenting would be when our kids became teens. The “Justwaits” loved to warn me in a somber tone, “You think it’s hard now — JUST WAIT till they are teens!”  With those warnings ringing in my ears, I started doing some research and seeking tips for effectively parenting teens. I wanted to be prepared! 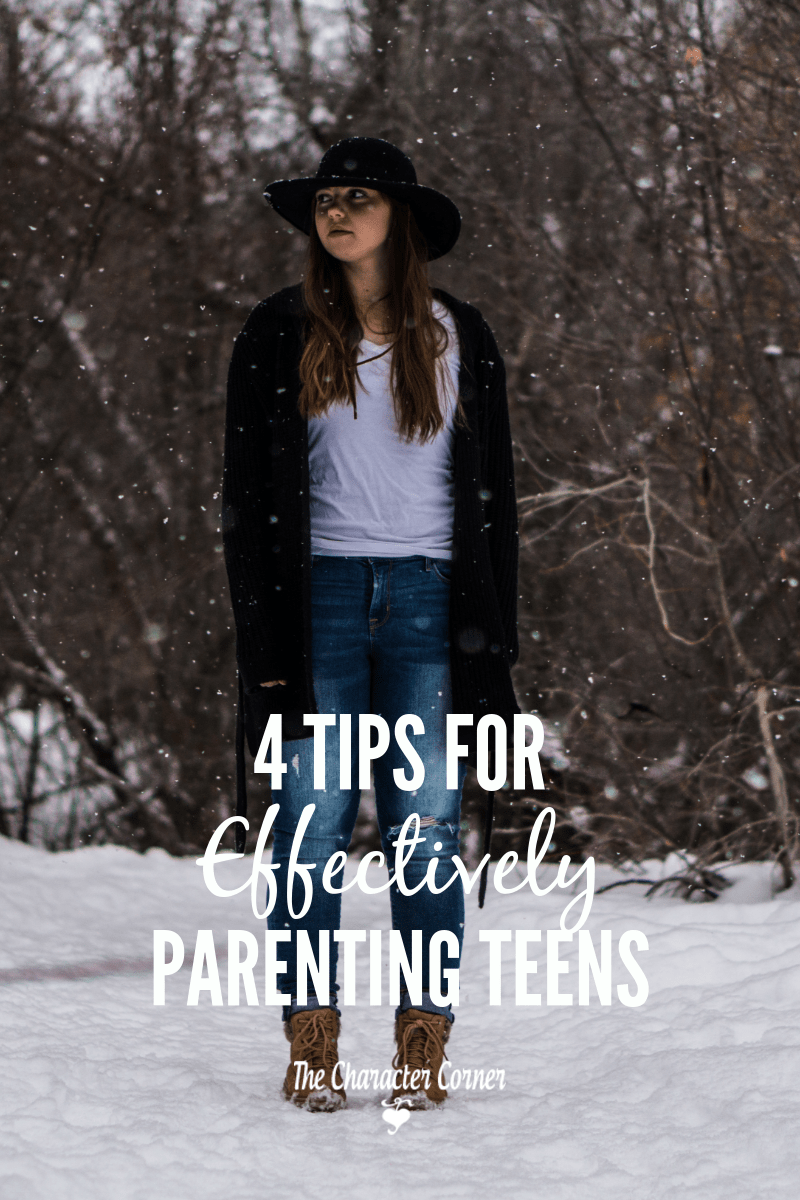 As a mom of eight kids, can I reassure you that with a few tips under your belt, you really do not need to fear the years of raising teens!

Now I will say that there are new challenges when your kids are teens, but at the same time, I loved those years. The most important and probably most difficult thing to do as your kids become teens, is make a transition in how you treat them.

When they become teens and young adults,  the relationship begins to change. However, it is SO easy  to continue to try and control your teens, treating  them the way you did when they were young, and in training. Without meaning to, many parents make mistakes in how they parent their older kids.  (Yes, I have been guilty of many of them!)

Here are FOUR  TIPS  that are very important to remember for effectively parenting teens.

1. The most important thing to focus on  is keeping their heart.

As our kids move into the teen years, this is extra important, because having their hearts means having the opportunity to continue to pour into them, teach them our values, and influence them.

To keep their hearts, we must purposefully work to cultivate and keep a strong relationship with them.  This will require time! Our teens need us to be available to listen to them, and show an interest in what they are interested in and excited about. Find those areas of interest, and ask questions about it. Listen as they share.

Keep in mind the importance of making them feel it is safe to share their heart with you.  It is SO easy to immediately respond negatively or give correction when your teens share their feelings with you.

It may seem like they are “wasting their money” on something that you think is foolish. However, if you say that to them, it conveys a lack of acceptance to them.

If they tell you what they think about something, and their thinking is “off”, don’t respond with “Why would you even THINK that?” Again, that conveys a lack of acceptance, or the idea that they can’t make you happy. They will then hesitate to share their thoughts with you.

It is vital to communicate acceptance to your teens. They should never feel they need to change in order for us to “like them” or accept them.  If they fail to find that acceptance from us, they are going to take it from the first person or group that offers it to them.

2.The KEY for effective parenting of teens is NOT control or intimidation, but rather guiding them.

Our goal should be to guide them toward independence, and prepare them for life.

A great example of this is how Solomon guided and appealed to his sons often in Proverbs with his words. (“My son, listen to my words; my son, keep my commandments,” etc.)

He was giving them commandments, while appealing to them to listen. He gave instruction with guidance about values, wisdom, responsibilities, etc.

He lovingly guided them and advised them towards living wise, righteous lives.

Often we fail to come along side our teens as a guide, and remain more in the threatening, controlling mode, because we don’t look at them as adults.

Do you know the word teenager is not in the Bible? The term young/men is used 140 times in the Bible.

This doesn’t say, When I a became a teenager (or adolescent.) God looks at teens as an adult in training. They don’t  just magically become an adult when they turn 18.

Adulthood is a process that begins when they turn 12 years old.

We need to treat our teens with respect, as we would another adult.   If they have something to say, listen to them as wise, contributing adults. (You are still the parent, and make final decisions, but OFTEN teens can give great advice and see things in a way that we may be missing.)

Ask them what they think about things, and if they have a good idea, run with it. Let them know you are thankful for their ideas.

Ask them how to do things if they are better at it than you. It makes them feel special that you value their knowledge and abilities.

4. Have clear rules and consequences.

When the rules and consequences are set, as a parent there is no need to take it personally and get all angry when a teen breaks a rule. You very simply remind the teen of what they already know, while encouraging them to do better next time.

Teens don’t resent rules that are clearly stated with consequences, if you have a good relationship with them.  On the other hand, if the relationship is lacking, they are likely to rebel against the rules and your authority.

Teen Peer Pressure is a real thing, so it’s vital as parents that we seek to keep a strong heart relationship with our kids, guide them in wisdom, and  let them know we accept them for who they are.

Ask God daily to give you wisdom as you guide your teens, and point them to Him![magicactionbox]

PrevPreviousWho Has TIME To Be Spiritual?!
NextThe Top 3 Priorities You Need to Succeed as a Tired MomNext